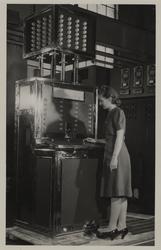 A woman with the Nimatron at the New York World's Fair in 1939. Caption reads: "Electric Brain to Match Wits with Word's Fair Visitors. Her opponent a playful electric brain, Miss DeVere Martin pits her wits against the Nimatron, to be a feature attraction at the Westinghouse exhibit in the New York World's Fair of 1940. The rows of lamps, above, substitute for stacks of matches used ordinarily in playing this ancient Chinese game."