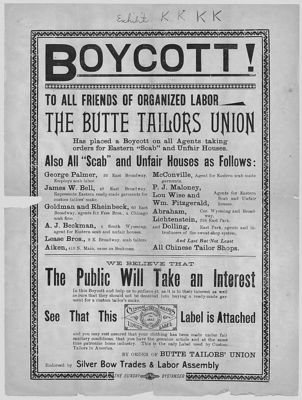 Like many places in the American West, Montana had its share of anti-Chinese violence in the last quarter of the 19th century. Labor unions boycotted Chinese owned businesses in 1891-92 and a circular was posted in 1884 ordering the Chinese to leave Butte with no affect. In late 1896, several labor unions organized a second boycott blaming the Chinese businesses for the poor economic climate. The labor unions notified their members and the public of the boycott of all Chinese owned businesses and those businesses employing Chinese labor. In an effort to discourage patronage, union members picked stores, posted flyers, and held parades. Many Chinese were forced to seek work in other cities however, several merchants decided to fight back and filed suit in Federal court in Butte requesting an injunction to stop the boycott and damages from the labor unions. The case from which this document originates, Hum Lay, et al.. v. Baldwin, has become known as the Chinese Boycott case.