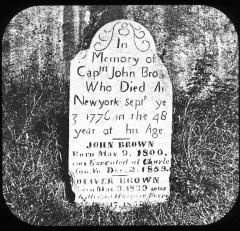 View of abolitionist John Brown's tombstone at North Elba, New York. John Brown was hanged December 2, 1859, after leading an October raid on the federal arsenal at Harpers Ferry, Virginia. Also on the grave marker are the names of Captain John Brown, who died in 1776, and Oliver Brown, a son of John Brown who died from wounds at Harpers Ferry.