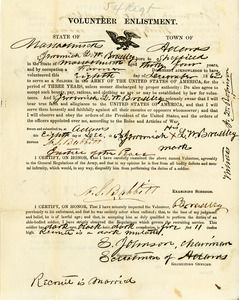 The volunteer enlistment papers of Jeremiah L. W. Bradley. Jeremiah Bradley resided in South Adams. He enlisted in the 54th Massachusetts Volunteer Infantry Regiment, the first official African American regiment to be formed in the United States. The regiment was organized by Massachusetts Governor, John A. Andrew, in March 1863 and saw its first action at James Island, South Carolina on July 16, 1863. Jeremiah Bradley survived the Civil War and was discharged on August 20, 1865.