Voting Record of the Constitutional Convention 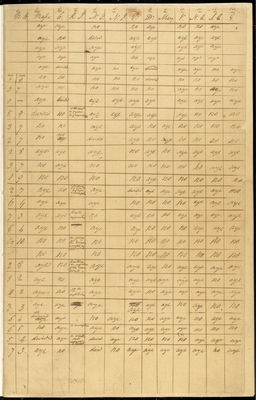 For four months the delegates debated fundamental questions relating to government, power, and human nature. Each and every clause of the Constitution was painstakingly argued and resolved. The voting record reflects the countless diplomacies, concessions, and comprises that produced the Constitution. This page records the final vote taken September 15, 1787. Delegates to the Convention signed the proposed Constitution on September 17, 1787. William Jackson, who served as Secretary of the Convention, recorded the votes. Throughout the entire voting record, the column for Rhode Island is blank or blacked out, since that state chose not to participate in the Convention. The column for New York is blank only for the later stages of the Convention, as two of the three delegates from that state departed early. The voting record of the convention is in two bound volumes.