"This Nation at War" Radio Show 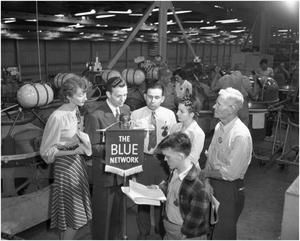 Photograph, from left to right, of Dorothy Powers, Frank Mills, Alvin L. Creswell, Margaret Brenton, E.L. Barrineau and Oliver Fitts. Ms. Powers is wearing a striped skirt, Mr. Mills wears a suit and tie, Mr. Creswell wears a tie and badge, Ms. Brenton wears a hat, Mr. Barrineau wears glasses and a badge and Mr. Fitts wears a flannel jacket. They are gathered around a microphone with a banner that reads, "The Blue Network". In the background is a factory with pod-shaped shaped things and workers.